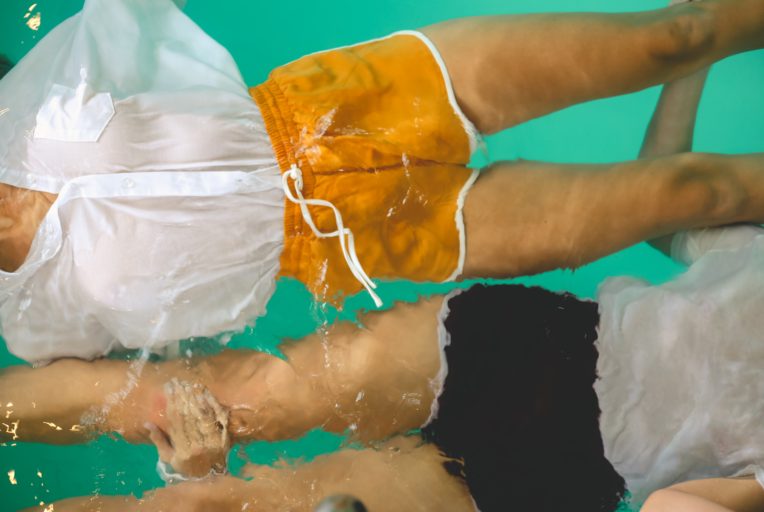 This post originally appeared on World Threads Traveler, one of my go-to sites for an eco-education with a dash of proper New Englander style. Gal-at-the-helm Cait Bagby rocks! These words are hers.

The topic of chemicals is a heavy one to unpack. There are so many different rabbit holes one could pursue. But, increasingly consumers are paying attention to the topic so it’s worth discussing, especially when it comes to chemicals in clothing.

Without question, the discovery and utilization of natural and synthetic chemicals have helped shape modern society. The term “chemical-free” is meant to assure us our products are natural and organic but there is no such thing as “chemical-free” and our clothing in no exception (everything we interact with is a chemical compound). Concern is required when distinguishing between useful and harmful, necessary and unnecessary additives. And, when discussing chemicals in clothing we need to focus on the synthetics which are an add-on such a dyes, wrinkle, water and odor-resistant. Then there are the synthetic materials.

Chemicals in clothing start with the materials in both natural and synthetic fabrics. Whether it is cotton being grown or plastic being produced to create nylon, many natural fibers (unless certified organic) are grown with the help of pesticides, herbicides, insecticides and fungicides. Even those certified organic don’t mean there are no chemical additives to aid in the fiber growth. Many synthetic chemicals are used around the world in products labeled “organic” as they are subject to local governmental and international regulations. (Sustainable Fashion Certifications)

Why are chemicals in clothing a problem?

Skin is the largest organ in the body. We know what goes into our bodies matter but what goes on it matters just as much. The Green Beauty movement has been growing because studies show us that chemicals in our skincare and makeup products can and do get absorbed into our skin. The same is very much true of our clothing. When these chemicals are absorbed into our skin they find their way into our blood steam with direct access to all internal organs. And, while we do excrete some of these chemicals through our pores, with new ones constantly introduced through direct contact with our daily wears, our bodies aren’t able to properly cleanse.

Impact to the Wearer

In this article on the big difference between natural and synthetic latex clothing, several chemicals used to create synthetic latex are known carcinogens and heavy metals that may be absorbed into the skin and have the potential to be a detriment to one’s health. Similar things can be said for many other types of clothing, as the range of side effects run from dermatitis to endocrine disruption to cancer. Different chemicals in clothing affect different organs in our bodies and while scientific study is scarce several of the chemicals used have clearly noted side effects. Formaldehyde is one of the biggest offenders. While many countries restrict the use of it the United States is not one of them and China is one of worst. Formaldehyde has been linked to an increase in lung cancer, difficulty breathing, itchy eyes, nose and throat among other side effects. Nonylphenol ethoxylate (NPE) are known to disrupt the endocrine system and affect fertility. It seems that for each garment solution found (wrinkle free, water repellant etc) the associated list of side effects only increases.

Impact on the Environment

Using chemicals in the production of clothing not only effects the wearer but also the environment. At the current volume clothing is produced and the heavy reliance on synthetics and chemicals, water and air pollution have been a common concern. Without strict regulations in many countries where most clothing is produced it is not unheard of for manufacturing plants to dump their waste water into local waterways, contaminating local livelihoods but also the larger global community. (You can read more about the environmental impact in “The Dangers of Fast Fashion“)

Harmful Chemicals in Clothing to Watch Out For

There are a few chemicals which have been verified as carrying significant dangers to both the wearer and the environment. (Original article written for Mochni. You can read the rest at Toxic Fabrics: Are We Ignoring the Largest Organ In Our Body)

This commonly seen word is a group of chemicals used to make plastic and vinyl more flexible but can also be used to make some items softer. For clothing Phthalates are mainly used for plastisol printings – think t-shirts with images on the front. There has been a call to limit or eliminate their usage due to its known prosperities leading to endocrine disruption which could cause birth defects or contribute to breast cancer. The good news about Phthalates is that they are biodegradable but prolonged exposure could mean bad news especially when rubbing on your skin.

This group of chemicals is used for wetting, emulsifying, detergent, printing, and softening. The EPA has noted a rise of Alkyphenols in US water systems as a result of washing them from our clothing. The good news is a Green Peace study found that washing our clothing can help reduce the amount of APEO’s on our clothing. The not so good news is that it can lead to skin and respiratory problems and act as an endocrine disruptor. The other downside is the life cycle. Indicators show a long term continued environmental contamination. They are slow to biodegrade and as they degrade produce byproducts that have a higher toxicity.

Are just that: dyes – used in clothing. Some of these compounds, mostly the benzidine-based chemical, are considered carcinogens. This is largely due to the aromatic amines that are produced upon breaking down. They are already banned in Europe but countries in Asia where large scale production occurs often do not have regulations concerning Azo dyes. They can easily rub off on your skin – ever worn a pair of blue jeans that leaves your legs blue? When this rubbing occurs the aromatic amines, some of which reportedly cause cancer, are released. Respiratory and dermatitis problems have also been reported along with high levels of sickness among factory workers.

If you see an item of clothing touting wrinkle free, chances are it has been treated with formaldehyde. Also used to prevent mold and mildew during shipping this chemical can cause contact dermatitis along with nausea, coughing, burning eyes, nose, and throat. It has also been linked to cancer in test environments among rats.

Tips to Steer Clear of Chemicals in Clothing

Synthetics carry a heavier harmful chemical load as it requires more to produce the fibers. Opt for organic natural fibers such as cotton, linen, jute, silk, and hemp. Avoid clothing labeled as wrinkle, stain, odor, or water resistant. These are all chemical additives.

A note from Kasi on this recommendation: This also depends on your lifestyle and which garments are best suited for you. For instance, synthetics are better for athletic attire, as they often last much longer. However, they pose chemical and microfiber pollution issues. If you chose synthetics, opt for brands that use “rPET” or recycled polyester (Adidas and Athleta do this) or buy a GUPPYFRIEND bag from Patagonia to help offset the microfibers that enter waterways when you wash. To learn more check out my piece in The Revelator on this topic.

Choose items that focus on natural dyes or non AZO dyes. If no information is given opt for pieces that are lighter in color. The darker the color the more dye that is required to achieve that look.

Dermatologists recommend washing any garments before wearing. This helps to eliminate surface chemicals used during the shipping process to help prevent mold, staining, or other incidents which may occur during transit. Washing also helps to reduce the chance of contact dermatitis.

Not all companies are straightforward with what is being used in their textile manufacturing. Make sure you check the labels and brand pages. But, be wary that many companies do not publish this information as in many countries, including the USA, it is not mandatory as noted by Emma Loewe: How Worried Should You Be About Chemicals In Your Clothes…

“The Federal Trade Commission asks U.S. clothing retailers to share only fiber content, country of origin, and the identity of the manufacturer on labels. They are not required to disclose any of the chemicals used in the production process, even though by some estimates there are upward of 250 “restricted substances” used in textile manufacturing that pose potential health concerns.”

Hop on over to World Thread Traveler to check more of what Cait has to say.