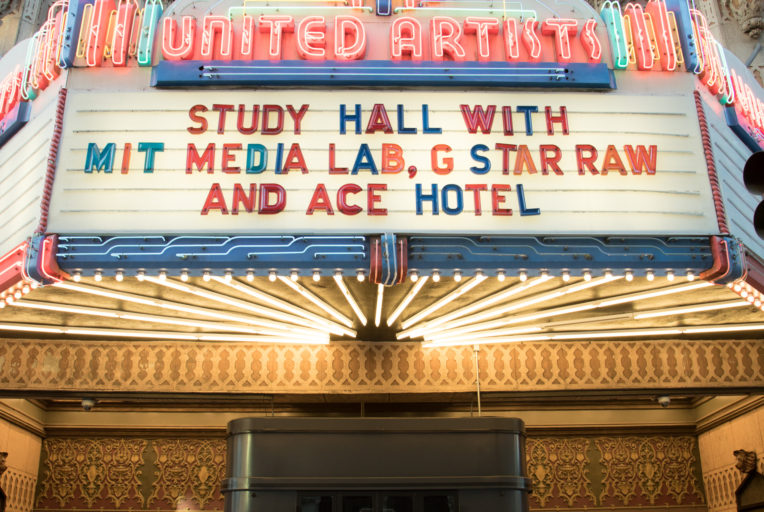 Celine Semaan stated as she kicked off the second Study Hall, a series of events focused on sustainable literacy in fashion partnership. Her aim, in a nutshell, is to do what South by Southwest did for tech, for fashion. She’s opening the industry up for meaningful, public dialogue and partnering with MIT Media Lab to make it happen.

Coincidentally, I met Celine at SXSW last year in Austin. Her panel on human rights was thoughtful and articulate and she beamed with authenticity when I interviewed her. So when I saw she was behind this event, I decided it was worth a venture to the best coast to listen and learn.

The line-up speaks for itself. There were reps from heavy hitters like Stella McCartney, Eileen Fisher, G-Star Raw Denim, Fair Trade USA, Fashion Revolution, and Fashionista as well as recognized personalities like Stacy London and Amber Valletta.

The conference’s specificity is what stood out most. The panelists got right to the matter without tossing around many eco-fashion platitudes. “Wear fewer, better things.” “Sustainability is everyone’s responsibility.” These are the things I typically hear at fashion conferences that, honestly, make me do a Polly Pocket-sized gag. Not only are they vague, some, like “fashion is the second most polluting industry,” are actually misguided. There was none of that at Study Hall.

As per Celine’s stat, we’ve reached a point where we need specifics, not fluffy talk or scary stats anymore, so I’m always seeking out advice, ideas and resources to report that you can either 1. integrate into your own wardrobe 2. buy to create system change or 3. inspire or enlighten you about the future of fashion.

Study Hall did this by diving deep into ‘circularity’ [here’s what that is]. The panelists focused on colonialism and deconstructed it to show how it continues to impact our fashion ecosystem to this day. It’s at play in our land use, dwindling water resources, workers’ rights, global trade, and development.

The conversations played out around America’s favorite contribution to fashion — denim. And there was no better place for it than LA, the city that churns out more than 80% of the nation’s production.

These are the ideas that piqued my interest but they only scratch the surface. I encourage you to check out the full lineup of speakers and learn about their initiatives, businesses, and nonprofits, especially if you’re in the market for a new pair of blue bottoms.

Sure the industry is huge in LA but that’s not the only reason it was the theme. Denim uses a ton of cotton, a textile that played an integral role in establishing colonial trade routes that created systems of segregation and disparity that persist today. Plus it takes almost 20,000 liters of water to make just one pair of jeans.

With water shortages happening all over the world, this is now a pressing issue. Unraveling denim helps unpack the systemic sustainability problems in fashion. And if one thing was clear from the panels, we won’t get sustainability right without openly talking about how companies are specifically addressing challenges.

G-Star RAW is leading the charge for the eco side. They created the first mass-produced  ‘circular’ jean before circular was a buzzword. That was 2013. Since then, they’ve also introduced Raw for Oceans, a collection that uses fabric made from rescued ocean plastic and EarthColors, denim dyed with plant waste.

At Study Hall, they announced their ‘most sustainable jean ever’,’ a Cradle to Cradle certified jean that uses 100% organic cotton and eliminates water waste. The best part is that they thought through the tiniest of details.

For example. the jean has no rivets or zippers to eliminate waste and they partnered with YKK to engineer their own buttons without toxic chemicals. On top of that, they open sourced the design so any brand can access G-Star’s fabric. I love this commitment to openness and looking out for the industry instead of their own vested interest.

Another favorite of mine was The New Denim Project, a family run private manufacturing company based in Guatemala that uses a fully closed loop industrial system to develop custom home wear and apparel for big brands like West Elm and Whole Foods and indie designers like Kordal Studio, Study NY and Sasha Nassar.

The company innovates through biomimicry, copying and bettering the earth’s natural cycles and processes. As big believers in “waste is not waste until we waste it,” their production aims to eliminate it altogether. The small amount they do generate from upcycling gets donated to local coffee mills for composting. So ultimately, it goes back to nature.

Sustainability is also tightly knit to the human side. Diving into this realm, Fashion Revolution kicked off a panel on colonialism with staggering statistics.

“152 million are affected by child labor and almost 80% are under the age of 14, said Lauren Fay [ILO]. “Even in countries with strict laws, there are gaps in the systems. This happens in Los Angeles, here in our backyard.”

Currently, only 37 brands have signed on to the organization’s transparency pledge. There’s a threefold way to change this, according to the makeup of the panel.

First, it’s through recognized standards like Fair Trade USA, which takes a market-driven approach to alleviate poverty working across a variety of products like coffee, cocoa, coconut, and seafood in addition to apparel and home goods.

According to their rep, Anna Banks the organization works across 70 countries to create factory standards, empower workers by establishing peer-elected committees that decide how funds are allocated within their communities and, finally, to move consumers to buy products with high social, environmental and economic standards.

Ben and his team operate independently and conduct carefully constructed investigations, often traveling to the source to ensure compliance with local law. Transparentem’s recon often involves video footage that it turns over to brands to have a “first crack at the information.”

“We give them an opportunity to unfuck their supply chains before we release any negative information to investors, regulators and select journalists.”

“Our first interest is ensuring workers are protected but these two things [protecting the brand] can come together at the end of the day.”

In the future, this investigative work will likely get beefed up by development in the blockchain space that allows governments, brands, and regulators to track physical assets like textiles and ensure human rights compliance. Turns out it’s not just the talk of Squawk Box. Check out Samantha’s company Chronicled if you’re interested in this space.

Finally, there’s the education piece. Breaking apart colonialism is complex and it often requires backtracking to break down inherent or learned misconceptions. What a better place to start than with youth?

Sissi Johnson is an MBA educator in the US and UK who focuses on subcultures, emerging markets, and digital anthropology. Her hot-button issue is branding places, especially ones that aren’t western, and she’s focused on implementing change through individuals.

“I tell my students from African nations all the time to stop saying they’re from a ‘third-world country,’” she said. “I want them to decolonize their voices. This is an issue that’s bigger than fashion. It’s about rebranding a place. Paris has already been branded as beautiful. It’s time to reclaim our design.”

Right now the world has its eye on the African subcontinent. While luxury designers have a long history of ripping off African designs without as much as a referential nod (here, here) and viewing designs through the reductive lens of the ‘tribal motif’ or ‘wax prints’, Sissy says this is changing.

According to her, there’s no such thing as an ‘African market.’ It’s extremely hard for a company to tap into the entire continent. In Nigeria, for instance, someone the north probably won’t understand someone from the south. And that’s just one nation of 54. We’re talking about a continent with a massive array of religions, ethnic groups, and languages.

For international fashion companies to succeed there, they have to get specific and invest in cultural awareness. And conversely, in order to change the narrative, African nations have to stand for dignity.

Take Rwanda, for example. In the aftermath of the 1994 genocide, the country made significant strides to put women in government. Following this progress, it decided to buck Trump’s tariffs and protect its re-emerging garment sector by blocking US imports of secondhand clothing.

The counterargument here is that this could open the nation up more to cheap imports from China, but Sissi had a positive outlook.

“There’s so much happening in the country that we’re not talking about. It’s open to tech. It’s got a vibrant textile ecosystem and its people are committed to changing the narrative. I know they’ll succeed.”

Enter the final debate of the conference and the existential question in the room…who’s responsible for decolonizing fashion and ensuring a greener future?

This conversation was broad and contentions but it boiled down to a few basics. If you’ve got the financial power to vote with your dollar, please do it. It does create change. However, one of the biggest challenges in changing fashion is the supply chain and developing an entirely new textile economy. And that’s mostly on the brands.

On the consumer side, you’re often lost and who can blame you?!. You’re getting pulled in so many directions with misleading advertising. You’re well intended. You care about ethics. You’re seeking products that fit and make you look beautiful. And you also want them to be relatively easy to find and affordable.

That’s where I come in. Keep coming here and I’ll continue to expose as much as I can about what’s happening behind the seams in fashion as well as profiling accessible and cool clothes that have my ethical stamp of approval.

Thanks for joining the journey.

Watch Who Will Inherit the Earth, film by The Library, produced by Celine Semaan and directed by June Canedo